The iconic Soviet art journal that defined an era

In the wake of the Russian Revolution, the group “Left Front of the Arts” was formed in Moscow, bringing together creative people of the era—avant-garde poets, writers, photographers, and filmmakers, including Vladimir Mayakovsky, Osip Brik, and others. The group’s philosophy was to re-examine the ideology of so-called leftist art, abandon individualism, and increase art’s role in building communism. The group considered itself as the only representative of revolutionary art. In 1923 they founded the journal LEF (Left Front of the Arts), which was published until 1925. In 1927, it was succeeded by Novyi LEF (New LEF) and published until 1928. Despite its short run of only 33 issues, LEF inspired entire movements and artists not only in Russia, but throughout the world.

LEF served as a forum for intense debate, including manifestos, polemics and critical articles on photography, film, theater, architecture, and design. The journal encouraged experimentation with writing and promoted the idea of “factography,” or the use of language or art to describe or depict the realities of everyday life in the Soviet Union. The journal also championed photography and film as the most suitable forms for postrevolutionary art. The journal’s striking illustrations and covers, many of which were designed by the renowned artist and photographer Alexander Rodchenko, served as an alternative model for realism, challenging the grand, monumental style that was quickly dominating official Soviet art. 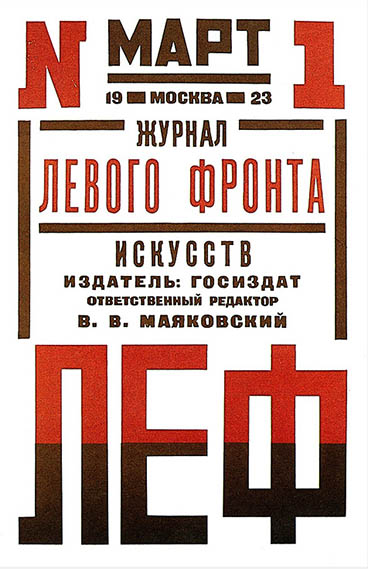 Left Front of the Arts

The LEF digital archive comprises the entire collection of the 33 published issues, completely digitized for the first time (over 450 articles).

The LEF digital archive offers scholars the most comprehensive collection available for this title, and features full-text articles, with full page-level digitization and complete original graphics. The archive has searchable text, and is cross-searchable with numerous other East View digital resources.