Official newspaper of the Central Committee of the Kirghiz SSR

Established in 1925 in what was then the Kara-Kirghiz Autonomous Oblast in the RSFSR, Slovo Kyrgyzstana is a Russian-language newspaper that served as the official party organ of the Central Committee of the Kirghiz SSR throughout its Soviet existence. It has been published independently since it gained independence from the Soviet Union in 1991. Known variously as Batratskaia Pravda (March-June 1925), Krest’ianskii put’ (1925-1927), and Sovetskaia Kirgiziia (1927-1991), at its peak the newspaper claimed a circulation of 123,000 copies and was the most important media organization disseminating the Communist party’s official stances and directives. Slovo Kyrgyzstana covers both national and international affairs, culture, economics, environmental issues, healthcare, religion and other important issues of concern. 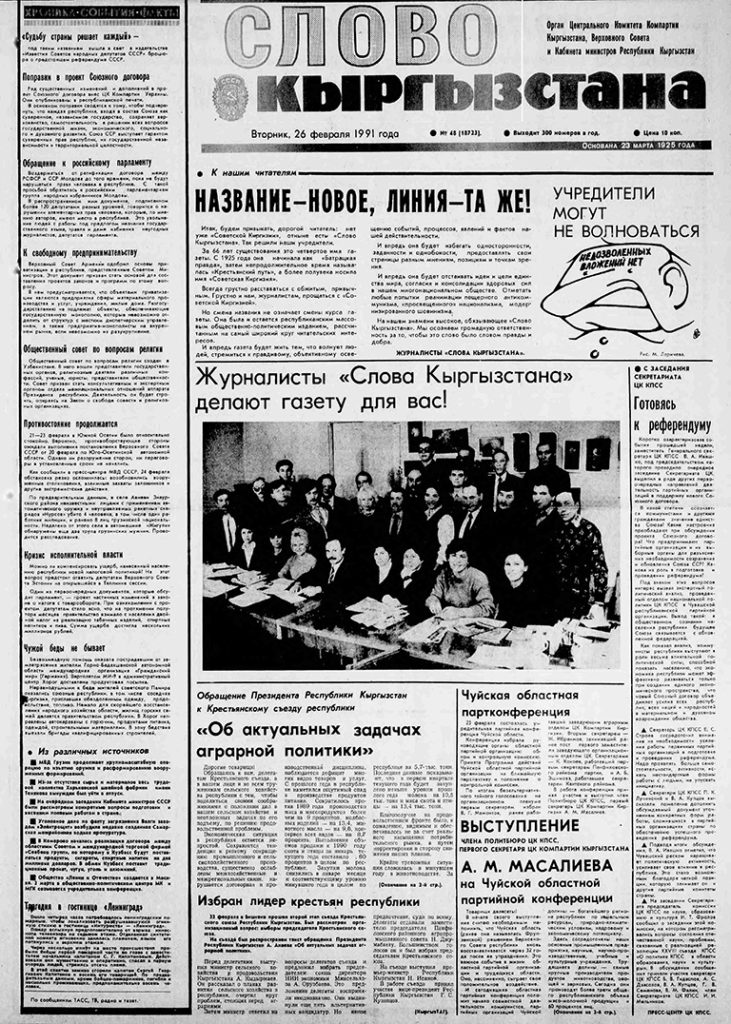 The Slovo Kyrgyzstana digital archive comprises over 120,000 pages and includes all obtainable issues of the newspaper’s previous titles (Batratskaia Pravda, Krest’ianskii put’, and Sovetskaia Kirgiziia). The archive contains all obtainable published issues from 1925 on, with an additional year’s worth of content added on an annual basis. The archive offers scholars the most comprehensive collection available for this title and features full page-level digitization, complete original graphics, and searchable text, and is cross-searchable with numerous other East View digital resources.

The Slovo Kyrgyzstana digital archive is a part of the East View Global Press Archive® (GPA), a groundbreaking program from East View Information Services to create the most comprehensive collection of digital news sources from around the world. GPA is the result of a landmark initiative of Stanford Libraries and the Hoover Institution Library & Archives to digitally preserve and make more accessible thousands of original print newspaper publications collected by the Hoover Institution and now housed by Stanford Libraries.

Kavkaz Digital Archive
Newspapers of the North Caucasus, Abkhazia and South Ossetia
Periodicals of Central Asia and the Caucasus