The first Russian-language newspaper in the Caucasus

The newspaper Kavkaz (Кавказ, The Caucasus) was published during 1846-1918. It was the first Russian-language newspaper in the Caucasus, published in Tiflis (Tbilisi), Georgia. The idea to publish this newspaper came from Prince Mikhail Vorontsov who was the imperial Governor-General of the province at that time. The main purpose of the newspaper was, on the one hand, to promote the Russian culture and Russian influence in the Caucasus, and on the other hand “to acquaint the Russian public with the life, habits and traditions of the tribes populating the province of the Caucasus.” Kavkaz published official documents of the Russian Empire, as well as many historical, cultural and archeological writings by prominent public and cultural figures of the local intelligentsia. 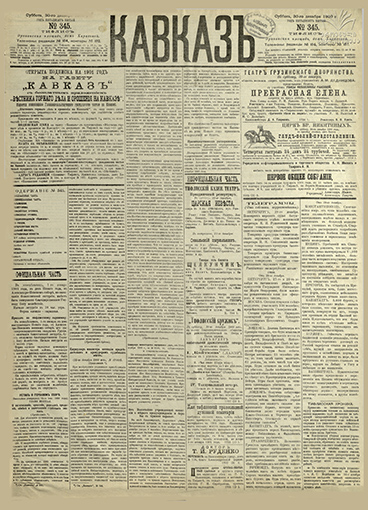 Kavkaz began publication in 1846 as a weekly newspaper; from 1850 it started to come out twice a week; in 1868 its periodicity changed to three times per week; and from 1877 it became a daily publication until its closure in 1918. During the brief period from 1846-1847, this newspaper had an Armenian-language counterpart. The Kavkaz Digital Archive contains all known and available issues of the newspaper. The Kavkaz Digital Archive offers scholars the most comprehensive collection available for this title, and features full page-level digitization, complete original graphics, and searchable text, and is cross-searchable with numerous other East View digital resources.

Newspapers of the North Caucasus, Abkhazia and South Ossetia
Periodicals of Central Asia and the Caucasus
Pravda Digital Archive