A resource on Israeli life and culture 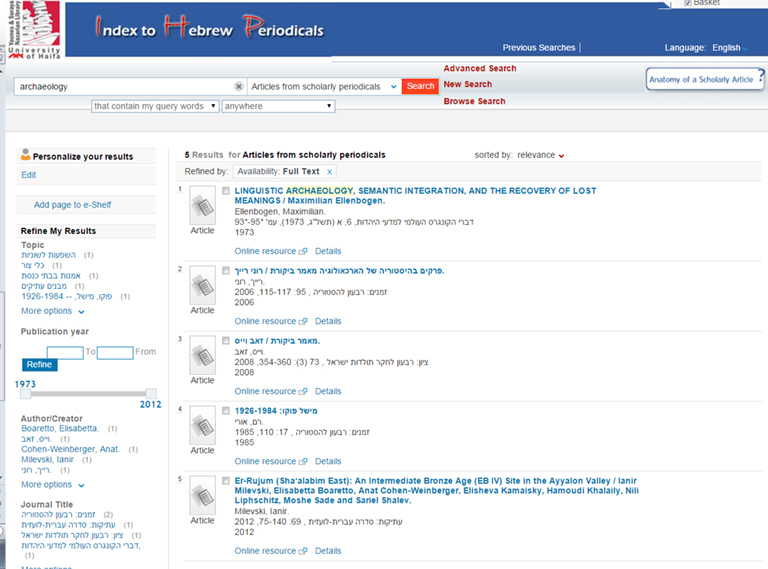 About the Index to Hebrew Periodicals

The Index to Hebrew Periodicals database currently contains over 850,000 items, including:

The Index to Hebrew Periodicals (IHP)

Abstracts of major Hebrew journals from 1977 to date with the exception of weeklies and newsletters. The Index to Hebrew Periodicals covers a variety of subjects with an emphasis on Judaica, literature, education, arts, law, and current Israeli affairs (politics and society). Currently adding approx. 18,000 articles per year, from about 450 current titles. About 73,000 bibliographic records are linked to full-text articles, with access to some of the full texts requiring journal subscription.

A project of the University of Haifa Library in cooperation with the library of Yad Yitshak Ben Zvi. The purpose of EID is to complement the Index to Hebrew Periodicals with additional material relating to the history, geography, and archaeology of the land of Israel. It includes non-Hebrew articles of all periods, pre-1977 articles in Hebrew, and a number of books, pamphlets, and reports. The Eretz Israel database contains approximately 28,000 items.

A project of Tel-Hai College Library in Upper Galilee, where indexing was produced and then input by the University of Haifa. Newspapers captured include: Ha’aretz, Hatsofeh, Al Hamishmar, Davar, Ma’ariv, Yediot Aharonot and Hadashot (until its closing). Particular emphasis is given to longer, analytical articles on social, economic, and political topics (including “op-ed” articles) as well as significant reviews of books, exhibitions, theater, and other cultural events. THIHN contains 188,500 newspaper articles from January 1985 to April 1992, and from April 1994 to February 1997.

The Bar-Ilan Indexing Project, carried out by the Indexing Unit of the Wurzweiler Central Library, consists of two parallel projects: 1) an index to articles in the literary supplements of the daily Hebrew press (from 1985). Includes the supplements of Ha’aretz, Yediot Aharonot, Ma’ariv, Ha’tsofeh, Yated Ne’eman, Ha’modia, Al-Hamishmar, Davar and Hadashot (the latter three—until they ceased publication); and 2) indexes to other Hebrew periodicals: Orlogin (1950-1957), Melila (1944-1956), Bar-Ilan (1965-1989) and Molad (1948-1986). While there is some duplication and overlap with the other components of the Index to Hebrew Periodicals, the vast majority of the BIIP’s 84,600 records are unique. They are particularly important in supplementing the THIHN, both in coverage of the haredi (ultra-orthodox) press, and in partially filling in the gap in THIHN (April 1992-April 1994) in THIHN. Updated weekly.

The Index to Hebrew Periodicals Thesaurus

All four component files share the same common thesaurus of indexing terms. The Index to Hebrew Periodicals thesaurus is the largest and most comprehensive thesaurus of Hebrew indexing terms. The thesaurus is used by many other libraries and indexing projects in Israel and abroad. It contains about 230,000 subject entries. Subjects are interrelated using the standard broad/narrow/related term relationships, as well as scope notes and synonyms. The thesaurus terms are written in standard “brief” Hebrew orthographic form (ketiv haser).