Declassified Documents of the Ukrainian KGB

The explosion of the Chernobyl Nuclear Power Plant on April 26, 1986 in the Ukrainian city of Pripyat is considered one of the worst nuclear disasters in history. Yet 30 years after the disaster, a definitive account of the Chernobyl tragedy seems to be lacking, if only because many of the government documents and other relevant material had been classified and were out of the reach of academics. However, recently declassified documents, now available through East View Information Services, makes fresh research into the causes and the consequences of the Chernobyl disaster possible, allowing researchers, policy-makers, environmentalists and nuclear industry insiders unprecedented insight into the Soviet decision-making process.

The Chernobyl Files collection contains reports prepared for and by a variety of Russian and Ukrainian government agencies, including the KGB, that document and detail the most important developments in the wake of the disaster, as well as internal reports and investigations on its various causes. Some of the most fascinating items from the collection are internal reports, communiques, and correspondences between various heads of local and regional KGB officials long before the tragedy. Some reports going as far back as the beginning phase of the construction of the plant provide solid documentary evidence of criminal neglect in the building process, the unwillingness of the authorities to address the issues raised by the KGB and its vast network of informants, and the subsequent attempts at cover-up. One such report provides a painstakingly detailed description of the use of subpar building materials offering up a particularly spectacular microcosm of corruption, theft, and neglect that underlined Soviet central planning.

The collection also contains documents relating to the lesser-known September 9, 1982 partial meltdown of reactor Block no. 1, the subsequent mishandling of which was perhaps the first indication of the inevitability of the 1986 accident.

With materials going as far back as 1971 and up to 1991, East View’s Chernobyl Files collection offers a unique window into the entire spectrum of the secret information circulating within the Russian and Ukrainian governmental structures. 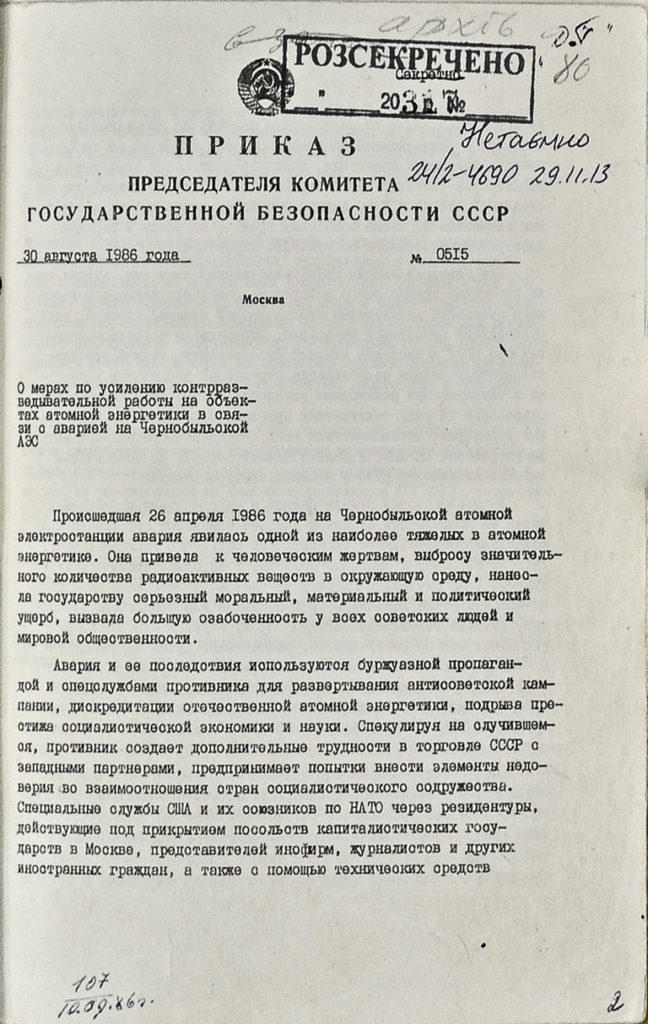 About the Chernobyl Files Collection

The Chernobyl Files collection contains 152 documents totaling over 500 pages, and features full page-level digitization, complete original graphics, and searchable text, and is cross-searchable with numerous other East View digital resources. Documents in the collection are in Russian and some in Ukrainian, with all titles translated into English.

Documents found in this collection include: