Unique Soviet newspaper for the Russian mining community in Norway

Poliarnaia kochegarka (Полярная кочегарка, Polar Furnace, 1934-1988; renamed Shakhter Arktiki [Шахтер Арктики, The Arctic Miner], 1989-1991) was an in-house weekly newspaper published in Barentsburg by the Soviet/Russian state-owned mining trust Arktikugol, which began operating on the Svalbard archipelago in 1931. The constant Soviet/Russian presence in this Norwegian territory was made possible by the so-called Svalbard (Spitsbergen) Treaty, which allows its signatories (currently more than forty countries) to engage freely in economic and research activities on the archipelago. During the Cold War, this led to the curious case of citizens of NATO and Warsaw pact countries coexisting peacefully side by side, with the Iron Curtain partially suspended (if not altogether lifted) in the otherwise potentially volatile and jealously guarded Arctic North.

Arktikugol was established to supply the Russian North with coal from Svalbard to help power the ambitious Soviet industrialization program. Poliarnaia kochegarka was created first and foremost to hold together the Russian-speaking mining community on Svalbard, which at various times was divided among the three Soviet settlements of Barentsburg, Pyramiden and Grumant. The newspaper also served to keep local citizens abreast of the news from the Soviet mainland and the rest of the world, something that used to be out of reach for several months each year (except for radio communication) when ice conditions and polar nights made navigation virtually impossible.

Among the newspaper’s contributors were both amateur and professional journalists, with early instances of citizen journalism playing a considerable role in the coverage of all sorts of burning issues pertinent to life in the polar regions in general, and Svalbard in particular. As the standard employment contract in the region lasted for two years, it is interesting to observe changes in the newspaper’s style from one editor-in-chief to the next. Among such editors-in-chief were the well-known Erzya author Nikolai Irkaev (1934-1937) and the prominent Murmansk journalist Stanislav Dashchinskii (1967-1969). 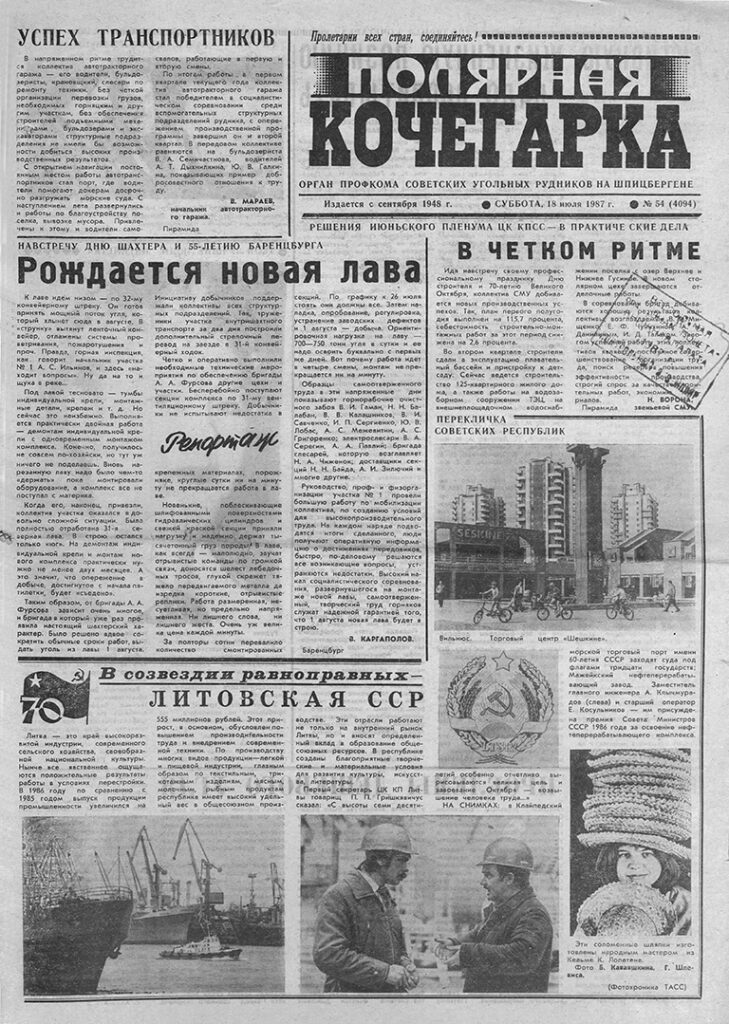 This digital archive contains the most complete collection available for this title, with nearly 4,400 issues and over 16,000 pages total of Poliarnaia kochegarka and Shakhter Arktiki (excluding 1941-1947, when the publication was suspended). The archive features full page-level digitization, complete original graphics, and searchable text, and is cross-searchable with numerous other East View digital resources.

Poliarnaia kochegarka is an extremely valuable resource, providing rare insight into the unique living and working situation on the Svalbard archipelago during the Soviet era. This digital collection will undoubtedly be of great interest to labor, High North, and Cold War historians, as well as those engaged in border, diaspora, cross-cultural and media studies.

The Poliarnaia Kochegarka Digital Archive is a part of the East View Global Press Archive® (GPA), a groundbreaking program from East View Information Services to create the most comprehensive collection of digital news sources from around the world. GPA is the result of a landmark initiative of Stanford Libraries and the Hoover Institution Library & Archives to digitally preserve and make more accessible thousands of original print newspaper publications collected by the Hoover Institution and now housed by Stanford Libraries.