East View Information Services is building an online database of important Judaica materials collected from various Russian and Ukrainian archives. The first collection in the Judaica Digital Collections database includes eight resources from the State Archives of Kyiv Oblast’, spanning the mid-19th and early 20th centuries. These resources have been digitized and are now available online, allowing users to search individual documents or browse by Archive Record Groups (Fond), Document Inventories (Opis), or specific File (Delo). Each resource includes an English-language introduction and a finding aid with document titles in both original language and Romanized transliteration. Read on for a brief description of these resources. 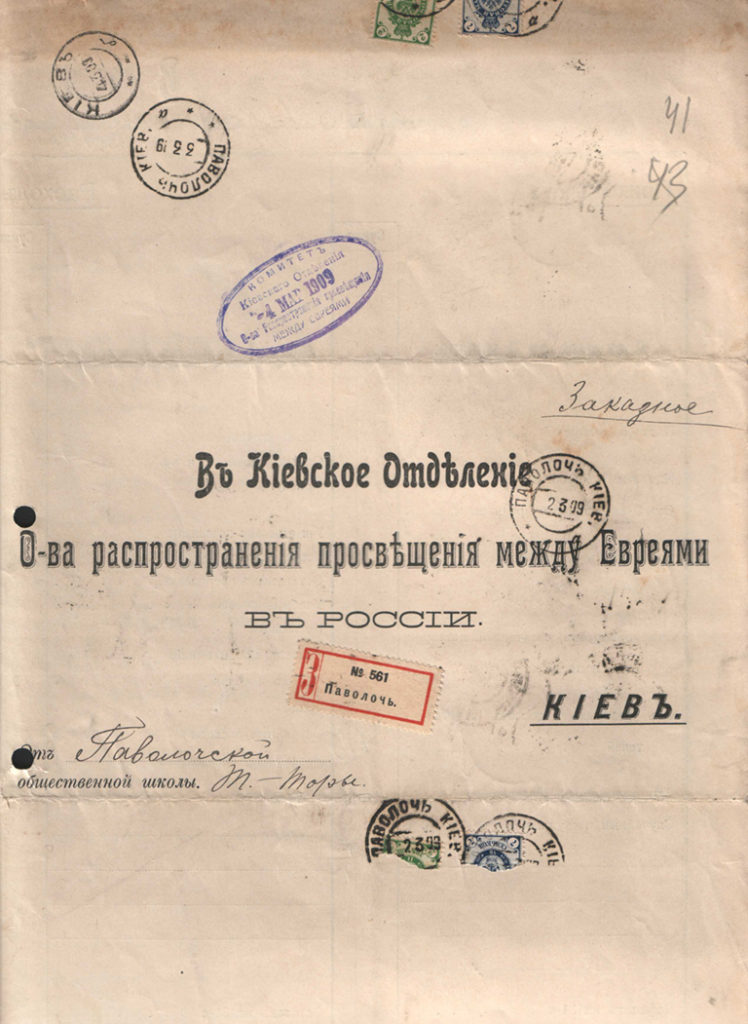 Promoting Jewish Education (190 delo, 15,133 pages)
Documents in this collection primarily detail the activity of the Obshchestvo prosveshcheniia evreev (Society for the Proliferation of Education among Jews), the leading organization in Russia and Ukraine in the early 1900s for the promotion of education and enlightenment among the Jewish population, and an important source of financial support for Jewish schools and educational programs.

Jewish Societies in Ukraine (565 delo, 14,244 pages)
This collection of rare archival documents contains important materials from Jewish Societies in Ukraine during 1857-1929, many of which were founded by donations from Jewish philanthropists and foreign Jewish charities. Also included are documents on the newspaper Kommunistishe Fon, an organ of the Kyivan Jews of the Gubernial Committee of the Bolshevik Party of the Ukraine.

Anti-Semitic Organizations: Union of the Russian People (16 delo, 1,192 pages)
As revolutionary turmoil swept through the Russian Empire in the early 1900s, the tsarist government lent its support to several right-wing political parties, including the notorious Soiuz russkogo naroda (Union of the Russian People). Openly nationalistic and discriminatory against the Russian Empire’s smaller ethnic groups, the Union established branches throughout the empire in the early 1900s. This collection includes rare materials on the Union’s activities, correspondence, and members.

Jewish Pogroms in Kyiv (152 delo, 14,826 pages)
This collection includes materials detailing the widespread pogroms of October 18-21, 1905 in Kyiv organized by the Black Hundred, an anti-Semitic, ultra-nationalist movement that supported the autocracy of Tsar Nicholas II. Materials were compiled from the Judicial Investigator of Critical Cases of the Kyiv District Court, the Kyiv District Court, and the Committee for Aiding Victims of the Pogrom of October 18-21, 1905.

Victims of Pogroms (502 delo, 31,592 pages)
The end of WWI, the aftermath of the Russian Revolution, and the subsequent Russian civil war saw an outbreak of increased anti-Semitic activities, particularly in Ukraine, where hundreds of thousands of Jewish people fell victim to pogroms. This collection offers a unique research opportunity with over 30,000 pages of never-before-seen correspondence, witness accounts, records of individual investigations, refugee and victim lists and statistics, communications with Western relief organizations, documents pertaining to Jewish emigration out of Ukraine, and more.

Mendel Beilis Trial Papers (435 delo, 4,339 pages)
The Beilis Case was one of the most important public events in Russia before WWI and garnered worldwide attention. Despite evidence to the contrary, police charged Mendel Beilis, a Jewish clerk in Kyiv, in the ritual murder of a Gentile boy, as part of a government ploy to incite mass anti-Semitic pogroms throughout the country. This unprecedented collection presents unique documents covering the trial and the events surrounding it, including proceedings of the court, testimonies of all 355 witnesses, speeches by the prosecution and the defense, materials of the investigation, newspaper articles, and other pertinent sources.

Jewish Emigration from the USSR (1,466 delo, 30,939 pages)
This collection contains documents from the Aktsionernoe obshchestvo Russkocanadsko-amerikanskoe passazhirskoe agenstvo (Joint-Stock Company Russo-Canadian-American Passenger Agency), which helped Soviet citizens process the necessary emigration documents and arrange transport out of the USSR from 1926-1930. Each of the 1,470 dossiers included in this collection is a personal file of an individual and family members emigrating from the USSR, and range in size between 3 and 150 pages. Documents include questionnaires, medical certificates, personal letters, and telegrams.